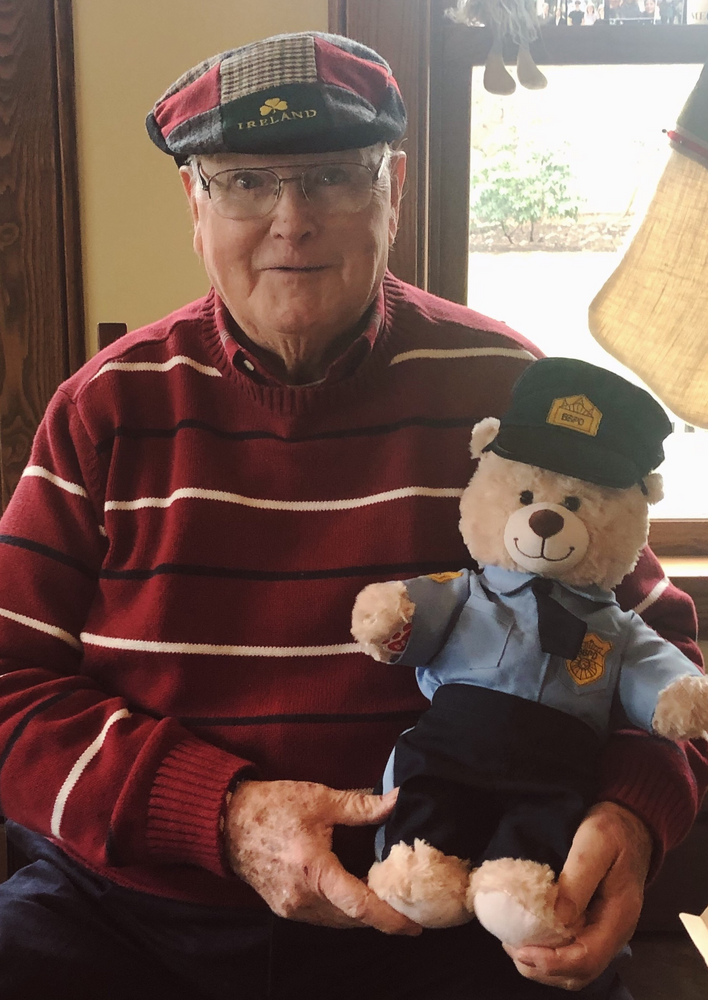 Please share a memory of Francis to include in a keepsake book for family and friends.
View Tribute Book
Francis Joseph Casey went home to the Lord on December 23rd after a several years' battle with pulmonary fibrosis. Frank was predeceased by his parents John and Mary (nee O'Leary) Casey and his brothers John Vincent and a brother Jeremiah who died in infancy. He is survived by his beloved wife of 58 years, Eileen (nee Lent), daughter JoAnn (David Beausoleil) Matthew and Lauren; son Frank Jr. (Qu) Daniel and Ceili Casey; daughter Patty Linn Rametta (Glenn) Laura Mary; sister Eileen Patricia McMahon and dozens of nieces and nephews. Born in the Bronx, NY, Frank's parents had immigrated from Valencia Island, Ireland. His brother Vincent was three when Frank was born, and his sister Eileen arrived three years after Frank. Sadly, their mother died within weeks of giving birth to Eileen. It was a rough and tumble life alright but they were very close to one another, deeply spiritual, and had lots of friends. In warm weather, Sunday sermons could be heard coming through stained glass windows of Saints Peter and Paul Catholic Church which lined up directly to open windows of their 2nd floor apartment a mere yards away. At that time kids in the Bronx played in the streets. When ten Frank suffered a compound fracture to his right leg when hit by a car as he was playing ball in the street. This did not confine him indoors, as he continued to play ball while in a full cast until minutes before his father was due home. His dad worked as a brake mechanic for the NYC Transit System. Frank joined the army shortly after graduating from Rice Christian Brothers High School and was stationed for two years in Germany. He then worked as a bookkeeper for the Lambs Club in Manhattan and from there decided on greener pastures and took the Ridgewood NJ police exam. While on his beat, he stepped into the local travel agency where he met and shortly thereafter married Eileen. Blessed with three children, JoAnn, Frank, Jr. and Patty, Frank was extremely active with his children and could be seen sleigh-riding, playing and coaching ball, attending wrestling matches, and managed to play a great deal of softball and still keep a perfect lawn. The Caseys had joyous holidays, trips to the shore, and a memorable trip to Disney. Frank and Eileen were ecstatic with the arrival of each one of their five grandchildren. Frank was an ardent fan of both the New York Yankees and Giants throughout his life (attested to by many articles of clothing). Graduating with an accounting degree from Bergen Community College, he put his knowledge to use. He was elected to the Board of Trustees of the NJ Police and Fireman Retirement System (serving for nine years) and began to question the State's handling of taxation on disability income. After several trips to the N.J. Division of taxation in Trenton as well as a trip to Senator Bradley in Washington, D.C a ruling was finally handed down in January 2001 reversing the state's position from taxable to non-taxable. Since this became retroactive many retired members on disability were able to benefit. Moving to Cape May after retirement from the Ridgewood Police Department began a new chapter in his life. He became a daily communicant at St. John Neumann parish, joined the Holy Name Society, Knights of Columbus and Spirit Players. He relished playing Monsieur Thenardier opposite Marge Thomas as Madame Thenardier in the Spirit Players' rendition of Les Miserables. He had seen the play on Broadway four times and was thrilled singing "Master of the House" (which he bellowed for several weeks around the house.) Visits from family and friends had been so enjoyable over the years. Frank loved swimming in the Atlantic from the end of May through mid-October as well as riding a bike throughout Cape May. He was active with the retired police association and traveled to Florida every year to meet up with a contingency. Once becoming infirm reading became a constant outlet. He relished authors such as Grisham, Baldacci, O'Reilly and Patterson. Frank lived his life with great zest and how we loved every moment we were so fortunate to have spent with him. Funeral services will be held at St. John Newmann Roman Catholic Church on Friday, December 30th – with viewing at 10 a.m. followed by Mass at 11. Internment will be at St. Mary's cemetery. To share condolences, please visit: www.evoyfuneralhome.com
Friday
30
December

Share Your Memory of
Francis
Upload Your Memory View All Memories
Be the first to upload a memory!
Share A Memory
Send Flowers
Plant a Tree