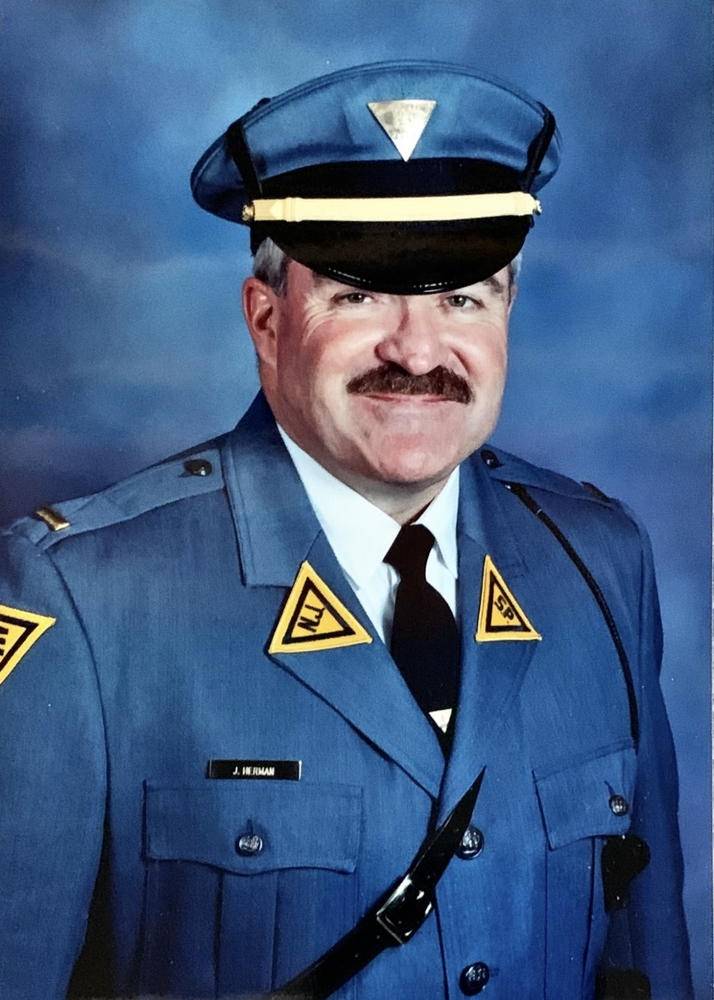 Please share a memory of John to include in a keepsake book for family and friends.
View Tribute Book
John J. Herman, a life long resident of Cape May County, died suddenly on Aug 25, 2022. He worked for three years as a Patrolman with the North Wildwood Police Department and proudly served for 25 years with the New Jersey State Police (NJSP). John retired as a Lieutentant from the NJSP and was a nationally known expert in the field of hazardous materals and motorcoach safety. Because of this expertise, he also served as Associate Staff for the United States Department of Transportation and visited nearly every state as an instructor for them, including Alaska anad Hawaii. John was also recognized for his service with the NJSP in the aftermath of the attacks on the World Trade Center. After retirement from the NJSP, John went to work for the Lower Township Elementary Schools for over twenty years, working closely with students and providing security. He was known as a positive role model and connected with many students on a personal level. More important to him than anything else was his family, including his beloved wife of 44 years, Janet, childred John (Vicky) and Laura (Joel) and especially being ”Pop-pop” to his four grandchildren, Austin, James, Ellie, and Nicholas. He is also survived by his sisters Madeleine Hewitt (Jerry) and Rita Danhardt (Bill). He was predeceased by his parents, Elwood N. Herman and Mary I. Brown, his brother Nicholas Herman (Becky) and sister Mary A. Keefe (Art). He is also survived by numerous nieces and nephews, cousins, and other extended family, whom he all loved. He loved spending time with his grandchildren, especially on the Wildwood Boardwalk, fishing, hunting, walks in North Wildwood with his wife, and watching the Cape May-Lewes Ferry dock. A student of naval history, he was an honorary member of the crew of the U.S.S. San Juan (CLAA-54), his father’s ship in WWII. He also loved the New York Yankees and Notre Dame Football. He adored Columbia Fleeces and visitng his friends at the Lower Township Dump; no trash can was ever full on his watch. John was an active member of his community, participating in the church, Lower Township PTA, and coaching baseball, from Little League to his alma mater, Wildwood Catholic High School, as an assistant baseball coach. He also loved umpiring baseball, refereeing basketball, and volunteering at the Wildwood Naval Air Station, especially the annual airfest. He loved being the master of ceremonies at the Coombs-Douglas Run in memory of his friends. He was known for his luck at the lottery, especially scratch offs, and his beloved grandaughter anointed him the clawmaster for his skill at the boardwalk claw machines. John will be deeply missed by his family; he was a loving father and husband, his daughter’s protector and his son’s best friend. He loved all of his family fiercely and deeply. While he will be deeply missed, he will never be forgotten. A Mass of Christian Burial will be held 11:00 AM Wednesday, August 31, 2022 at St. John Neumann Parish/St. John of God Roman Catholic Church 680 Townbank Road North Cape May NJ. Family and friends are invited to pay their respects from 10:00AM until 10:45AM. Interment will follow on the grounds of St. Mary’s Cemetery Cold Spring. Condolences will be received at EvoyFuneralHome.com.
Wednesday
31
August

Share Your Memory of
John
Upload Your Memory View All Memories
Be the first to upload a memory!
Share A Memory
Send Flowers
Plant a Tree