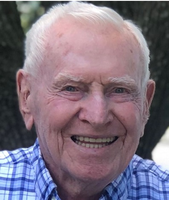 Thomas “Deacon” Kelly, age 90 of Elkins Park, PA and North Cape May, NJ passed away on Tuesday, April 27, 2021 at Abington Memorial Hospital. He was preceded in death by his wife of 50 years Helen “Connie” Kelly and his grandson Thomas J. Kelly III. He was also preceded in death by his siblings Catherine Ryan, Veronica Belmonte, James Kelly and John Kelly and his nieces Catherine Wynn and Jackie Ryan. He is survived by his children and grandchildren Cathy Kelly; Mary (Rock) Siravo and their children Bella, Rocco and Ana; and Thomas J (Patty) Kelly Jr. and their children Mike, Lauren and Eric, and his niece Betsy Meehan. Tom was born in Philadelphia, served in the US Army during the Korean War, and was a retired Deputy Superintendent of the Philadelphia Prison System. Tom was a man who took the approach of trying to live an uncomplicated life in today’s complex world. He found happiness in simple things such as listening to Frank Sinatra or Nat King Cole, feeding the birds, trips to the casino with his family, and working in the garden. He was an avid Phillies and Eagles fan with a love of football that started with his days of playing for the East Falls Falcons. He loved to tinker with all kinds of gadgets and embraced any new technology that allowed him to remain close his family, no matter the distance. He was a great dog owner to his “little buddy” Roxy, and the two shared an incredible bond of companionship (and some mischief!) over the years. Tom was known for his big, jolly smile, and his hearty laugh that would light up a room. Services are private with entombment at St. Mary’s Cemetery, Cold Spring, NJ. In lieu of flowers, donations can be made to the Cape May County Zoo, P.O. Box 864, Cape May Court House, NJ 08210. Condolences will be received at EvoyFuneralHome.com