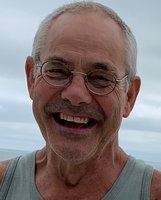 Gregory Oscar Strobel, 68, of Villas, New Jersey, passed away peacefully on Thursday, October 8, 2020 at his beach house, his new paradise here on Earth. Greg is survived by his daughters Jennifer Baldwin and her husband Robert of West Chester and Christine Napoli and her husband Joe of Drexel Hill, along with his loving grandchildren; Mason, Isabel, Evelyn, and Hayden. He is now reunited with the love of his life, Donna, with whom he shared a storybook love for over 45 years. Greg was born in Terry, Montana to Oscar and Breta Strobel (Hendrickson) and was "son number four" in a family of eight siblings. His family was monumental in establishing his faith and relationship with God, which was unwavering. His parents taught him values which would guide his journey throughout his life; always do quality work, do the right thing, never quit, and do your best. Having the opportunity to grow up tussling with his four brothers, he discovered in high school that he had a gift for wrestling. Greg's success as an athlete and coach in the world's oldest sport led to setting still unbroken records, inductions into several Hall of Fames, and numerous other awards acknowledging his contributions to the sport of wrestling. His career allowed him the opportunity to visit thirty-four countries across the world and all fifty United States. Greg was an accomplished educator. He continued to teach the sport of wrestling well after he retired from coaching. Greg understood the importance of being a teacher, which is summarized well in one of his favorite movies, Mr. Holland's Opus; "A teacher has two jobs: fill young minds with knowledge and give those minds a compass so the knowledge doesn't go to waste." Greg's lessons on the mat included skilled technique intertwined with universal life lessons. As a child, his favorite story was David and Goliath. Greg was always inspired by the story of the underdog; he knew everyone had potential. He viewed adversity as an opportunity to overcome challenges, even in the face of what seems impossible. He approached hardships as a problem to solve and handled everything with dignity and grace. Greg was a loving husband, adoring father and doting grandfather. To others he was a devoted brother, brother-in-law, uncle and friend. He lived and loved each day for all he could. He was a gift to those who knew him. Services: A private ceremony with immediate family to be held on Sunday, October 18, 2020. A Celebration of Life to honor Greg will be held at a future date in 2021. Details will be announced when plans are finalized. A memory tribute may be placed at www.evoyfuneralhome.com. Contributions: The effect Greg Strobel had on the sport of wrestling is just as important as the impact he had on peoples' lives off the mat. His passion for the sport superseded wins, records, or awards as his focus lied in the preservation and continued development of wrestling, its athletes and those that love the sport. In lieu of flowers, contributions can be made to the Greg Strobel 'Beyond the Mat' National Teams Leadership Academy, which has been created to continue Greg's legacy of teaching others and unleashing human potential in all areas of life. Mike Clayton is leading a team of USA Wrestling staff who are developing the curriculum for this academy to benefit current and future National Team athletes. Please send contributions made out to USA Wrestling to the following address: Greg Strobel Leadership Academy, USA Wrestling, 6155 Lehman Drive, Colorado Springs, CO 80918.