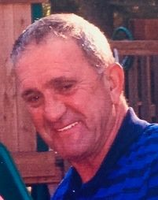 Cummiskey, Wayne F., 68, of Villas, passed away peacefully on Tuesday, May 12, 2020. Wayne was born on May 25, 1951, in Port Richmond, Philadelphia, PA, the youngest of 16 children. He moved to South Jersey in the early 1980's and worked for the Cape May County MUA until he retired in 2013. Most recently, Wayne was employed by the City of Cape May Public Works Department and was known and loved for his singing and his unique way of giving everyone a nickname. He is predeceased by his parents, Laura (nee Wolicki) and Edward Cummiskey, and his siblings, John, Mary, Edward, Lorraine, Shirley, Eleanor, Joseph, Joan, Barbara, Ronald, Patrick and Dennis. He is survived by his beloved son Brian (Erin) and grandchildren Ciara, Carter and Kelsey, his daughter Melissa (Eric) and grandchild Alexa, and his son Wayne. He is also survived by his brother Donald and Robert and his sister Marion, as well as many, many nieces and nephews. To share condolences, please visit www.EvoyFuneralHome.com.